Capital of Kilimanjaro Region in Tanzania

Moshi attained the status of a town in 1956.[4] In 1988, it became a municipality under Tanzanian law, but as of 31 October 2014, the process for submitting its application to become a city was in its final stages.[6] Moshi is administratively divided into 21 wards and then subdivided into 60 hamlets.[4]

As the capital of the region, it is the center of government activities, trade, finance, and tourism. In the first half of the 20th century, Moshi was traditionally an important railway town, center of banana agriculture, and commercial producer of pyrethrum.[3]

There is annual fair, KiliFair, organized to be an international tourism & industry fair, promoting and presenting companies based in the Kilimanjaro region. The fair has the character of a business networking event for the tourism industry, in combination with a community fair to attract local people, families & expats.[7] Recently, Karibu Fair (TATO) and Kilifair, both well-known tourism fairs decided to join into one and create by far the largest and most important Tourism Trade Fair in East Africa. The newly formed “Karibu/KiliFair” is expecting to host 350+ exhibitors from East and Central Africa, 300+ international hosted and semi-hosted buyers, as well as approximately 4000 trade visitors during the days of the fair. The fair will annually alternate between Moshi and Arusha starting 2018 event.

Moshi is the home to one of the three Coca-Cola bottlers in Tanzania, Bonite Botters Ltd. Serengeti Breweries, an East African Breweries company, also has a manufacturing plant in Moshi. Just south of the city, there is a sugar production facility by TPC Ltd which owns one of the largest and oldest sugar cane plantation in the country. There are several small and medium scale manufacturing facilities in dairy and food packaging sector.

Moshi's lower altitude and drier climate mean that the main crops grown on the higher slopes of Mt Kilimanjaro, coffee[8] and bananas,[9] do not thrive there. The surrounding areas in Moshi district are known for extensive farms of maize and beans, grown once per year during the long rainy season (known as "masika" in Kiswahili). In addition, the Tanganyika Planting Company operates a very large sugar cane plantation and company town 20 kilometres (12 mi) south of Moshi.[10]

Roman Catholic missionaries introduced Arabica coffee cultivation to the Moshi region in 1893.[9][11] The Kilimanjaro Native Co-operative Union was established in 1929[8] by the district commissioner, Charles Cecil Farquharson Dundas.[11] Its purpose was to enable Chagga coffee growers to compete on equal terms in world markets with European growers.[11] KNCU collects coffee from 96 village societies, representing over 150,000 small-scale farmers.[8] KNCU handles between 50 and 70 percent of the coffee grown in the area and trades over 5,250 tons of Arabica coffee, or about 11 percent of national production.[8]

Like all of Tanzania, Moshi has universal primary education. According to the Tanzania Demographic and Health Survey 2010, the Kilimanjaro Region, which includes Moshi, had the second highest female literacy rate and the third highest male literacy rate among Tanzania's then-existing 26 regions.[12] According to the Tanzania Poverty and Human Development Report 2005, the Moshi urban district had the highest literacy rate for persons over 15 years of age when compared to any of the 128 other districts in Tanzania.[13]

There are also various English medium schools with pre-primary, primary, and secondary education, such as the Eden Garden schools.

The main private hospital in the area is the Kilimanjaro Christian Medical Centre (KCMC), a zonal referral hospital. This complex has more than 450 beds and serves a population of over 11 million individuals. The Good Samaritan Foundation of Tanzania founded KCMC in March 1971.[20]

Next to KCMC is the Kilimanjaro Centre for Community Ophthalmology (KCCO), which was founded in 2001 and is co-directed by Dr. Paul Courtright and Dr. Susan Lewallen. A new three-story building for KCCO was finished in 2007, funded by several individuals and non-governmental organizations.[21] The KCCO is "dedicated to the elimination of avoidable blindness through programmes, training, and research focusing on the delivery of sustainable and replicable community ophthalmology services".[22] The KCCO has an "official memorandum of understanding ... with the Department of Ophthalmology and Kilimanjaro Christian Medical College under which the KCCO assumes or shares responsibility (subject to specific funding grants) for many teaching activities, running workshops and seminars, supervising the ... [Ophthalmic Resource Centre for Eastern Africa], serving in an advisory capacity for planning Eye Department services, conducting epidemiologic and clinical research in prevention or treatment of vision loss or related fields, and serves on committees".[23]

Moshi also hosts the Kilimanjaro Clinical Research Institute (KCRI), which is the research arm of KCMC. KCRI evolved from the Kilimanjaro Clinical Research Centre (KCRC) in 2009. KCRC was established in 2006 with the support of the Dutch government through the Netherlands-African partnership for Capacity development and Clinical interventions Against Poverty-related disease (NACCAP).[24][25]

The primary public hospital in Moshi is the Mawenzi Regional Hospital, which started sometime before 1920 as a small dispensary for German soldiers and became a hospital in 1956. The hospital has about 300 beds but is severely underfunded. In late 2010, its surgical services were suspended indefinitely by the Government and Private Hospitals Inspection Committee of the Tanzanian Ministry of Health and Social Welfare. The head of the committee, Dr. Pamella Sawa, said, "During our inspection, we inspected the theatre room of Mawenzi Hospital and found it very dirty, with no[t] enough ventilation, the situation which is dangerous not only to the patient but also to his/her attendant...."[26] The hospital includes a Care and Treatment Centre for people living with HIV/AIDS. The hospital's physical therapy department has a student learning program in cooperation with Norway, in which Norwegian physiotherapy students in their second and third years come as short term apprentices. 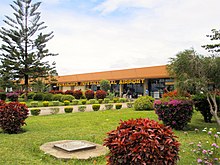 Moshi is connected to other cities in Tanzania by Tanroads highway T2.[27] Several bus companies operate intercity routes from Moshi. There are also local buses for the intracity travel.

Tanga Line passes through Moshi. The line carries cargo mostly cement from Tanga to Moshi and Arusha. There are strategies to revive the line for passenger services. 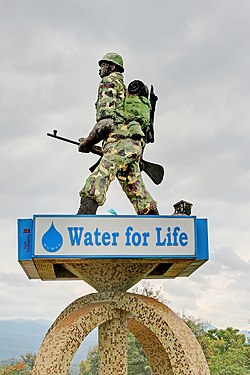 The Askari monument in Moshi.

Moshi hosts the Kilimanjaro Marathon, Tanzania's largest sport event, held annually at the end of February or beginning of March since 2002. The race is a member of the Association of International Marathons and Distance Races. Apart from promoting tourism, the race promotes the sport in Tanzania and has the official backing of the Tanzania Tourist Board, Athletics Tanzania, and the International Association of Athletics Federations.[29]

Moshi has one field hockey pitch, formerly known as Sikh Club and it is home to well known hockey teams from Moshi like Moshi Khalsa and Kili Vijana. Hockey is an active sport in Moshi and it holds tournaments as well such as the annual Nyerere Cup hosted by the Sikh Community.

Probably the most popular sport in Africa, Moshi has several football pitches where players from different ethnicities and backgrounds come together to enjoy the sport. The Ushirika Stadium is the only full - sized pitch where many official league matches have been played including the Tanzanian Premier League. Other pitches include the Hindu Mandal ground and the Moshi Club.

Moshi has a tropical wet and dry climate. Its weather is dominated year round by monsoonal flow. The northeast monsoon prevails December through March and is accompanied by the highest temperatures of the year. The southeast monsoon prevails from June through September. Unique among the world's monsoons, both monsoons in Tanzania are divergent in the low levels, shallow (averaging only 2 kilometres or 1.2 miles in depth), and capped by inversion and dry, subsiding air. These factors result in light or insignificant rainfall year-round except during the transitional periods between the monsoons.[34][35]

Moshi's wettest months are March through May, when around 71 percent of its annual rainfall occurs.

Moshi has been the base of opposition politics since the struggle for independence.

The last Mangi Mkuu (Paramount Chief) of the Chagga, Thomas Lenana Marealle II, whose palace was located in Moshi, worked for the independence of Tanganyika when it was still a United Nations trust territory under British administration. In his speech to the United Nations Trusteeship Council on 17 June 1957, he said that Tanganyika could become self-governing within ten to fifteen years.[37] This speech occurred one day before Julius Nyerere addressed the same body.[38]

In 2010, the unsuccessful Chadema presidential candidate, Willibrod Peter Slaa, received 55.6 percent of the popular vote in the Moshi Urban District compared to 43.5 percent for the nationwide winner, Jakaya Mrisho Kikwete of the Chama cha Mapinduzi party.[39]

In 2010, the Chadema parliamentary candidate, Philemon Kiwelu Ndesamburo, was elected to office with 62.3 percent of the vote.[40]

As of May 2012, six of the seven special seats on the Moshi Municipal Council are held by Chadema party members.[41]

In 1953, Journalist John Gunther described Moshi as "the kind of town Somerset Maugham, if he ever wrote about Africa, might have invented."[3]