Kilimanjaro Region is one of Tanzania's 31 administrative regions with a postcode number 25000.[2] The regional capital and largest city is the municipality of Moshi. With a HDI of 0.613, Kilimajaro is one among the most developed regions of Tanzania. According to the 2012 national census, the region had a population of 1,640,087, which was lower than the pre-census projection of 1,702,207.[3]: page 2  For 2002-2012, the region's 1.8 percent average annual population growth rate was the 24th highest in the country.[3]: page 4  It was also the eighth most densely populated region with 124 people per square kilometer.[3]: page 6

The region forms part of the Northern Tourism Circuit in Tanzania. It is home to the Kilimanjaro National Park (which contains Mount Kilimanjaro), the Mkomazi National Park, the Pare Mountains, Lake Jipe and Lake Chala. The region is bordered to the north and east by Kenya, to the south by the Tanga Region, to the southwest by the Manyara Region, and to the west by the Arusha Region.

The region is administratively divided into six districts. Each district has one local government council except Moshi District which has two, one of which serves as the capital of the region.

Of the region's six districts, four traditionally had Chagga settlements, which are Hai District, Moshi District, Rombo District, and Siha District. The other two, Mwanga District and Same District, have historically included Pare settlements. However, during colonial rule in the late 19th century to the middle of the 20th century, the region was divided into two main districts: Moshi district, which was composed of all the areas settled by the Chagga people on the slopes of the mountain, and Pare district, which was a Pare tribe settlement. The region, from earlier times, had been settled by the people collectively called the Chagga, the Maasai, Wakwavi, and Waarusha (in the lower parts of Mount Kilimanjaro), and the Pare on the Pare mountains. These have been intermingling, trading, and even fighting from time to time for various socio-political reasons. Later, other tribes also migrated to the area. Also Kilimanjaro region has blessed to have the Highest mountain all over the African countries. 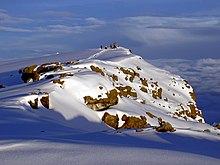 Mount Kilimanjaro lies on a tectonic plate line intersection 80 kilometres (50 mi) east of the tectonically active Rift Valley. The activity that created this stratovolcano dates back less than a million years. Steam and sulphur fumaroles here are indicative of residual activity.

At one stage, most of the summit of Kilimanjaro was covered by an ice cap, probably more than 100 metres (330 ft) deep. Glaciers extended well down the mountain forming moraine ridges, clearly visible now on the southern flanks down to about 4,000 metres (13,000 ft). At present only a small fraction of the glacial cover remains.