Vera Hamenoo-Kpeda (born 23 June 1992),[1] better known by her stage name MzVee,[2] is a Ghanaian singer, afropop, dancehall and R&B artiste. Her debut solo album[3][4] features several hit singles including 'Borkor Borkor' (meaning - Slowly), 'Natural Girl' and 'Dancehall Queen'. MzVee was signed to the record label Lynx Entertainment and was the winner of the New Artiste of the Year award at the 2015 Ghana Music Awards.[5][6] She parted ways with Lynx Entertainment in the year 2019. She is currently a solo artist.

MzVee was born in South La Estates, Accra to Ernest Hamenoo-Kpeda, a businessman, and Florence Hamenoo-Kpeda, a caterer. She has two older sisters and a brother and attended St Martin de Porres School in Accra in her early years[citation needed]. She moved on to St. Mary's Girls' Senior High School and is now studying Business Administration at Ghana Telecom University.[7]

MzVee first burst onto the Ghanaian music scene in the summer of 2012 as the lead singer of Lynx Entertainment’s girl band D3.[8] The band, released hit singles such as 'Good Girls Gone Bad' and 'Gyani Gyani' before splitting at the end of 2013 due to educational commitments of the young group members.[9]

MzVee launched her solo career with debut single ‘Borkor Borkor’ released in January 2014.[10] She followed this with hit single ‘Natural Girl’[11] and went on to win the 'Unsung Artiste Award' at the 2014 Ghana Music Awards.[12] Her debut album was released in November 2014[3] and features collaborations with several award-winning artistes such as Stonebwoy, VIP, Shatta Wale, Richie Mensah, M.anifest and Didier Awadi.

Following the success of her award-winning debut album, MzVee released her second album titled Verified in November 2015 to rave reviews.[13][14] The album has earned MzVee 7 nominations at the 2016 Ghana Music Awards[15] including 'Album of the Year' and 'Record of the Year' for the single 'Abofra' which features Efya. Her highly anticipated third album DaaVee was released in May 2017.[16]

MzVee took a two year break from the Music Industry from 2017 to 2019. In an interview with TV3[17] on Monday, January 5, 2020, she revealed that her reason for leaving the music industry was a massive depression which she was going through.[18] This has dismissed pregnancy rumors that some people were saying is the reason for her absence from the Music Industry.[19] Throughout the two year period MzVee found help from her friend Efya who kept supporting and encouraging her until she overcame depression.[20][18] She has announced that as of 2020 she is back to music and will be releasing a single she has titled "Sheriff".[18]

One other thing MzVee said when she returned from her depression-induced hiatus from music was that she will be releasing two albums.[17] However, she obviously could not release the two albums as she promised due to the COVID-19 pandemic.

She rather managed to release one album dubbed inVeencible.[21] The album which featured Sarkodie, Mugeez, Efya, Medikal, Kelvyn Boy, Kojo Funds, as well as Falz and Navy Kenzoo, was released on December 11, 2020.[22] In March 2021, she partnered with Trace TV to release her music video for her song 'You Alone'.[23] 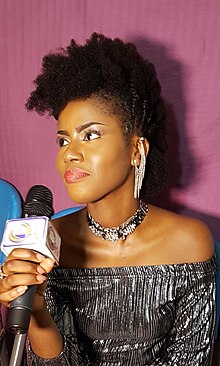 MzVee being interviewed at the 2017 Wave Concert

MzVee’s music contains elements of afropop, R&B and dancehall and her strong vocal abilities earned her a nomination for 'Female Vocalist of the Year'[24] at the 2015 Ghana Music Awards and the award for 'Most Promising Act' at the 2015 Ghana Music Honors.[25] She is regarded as one of the stars of Ghana’s dancehall scene and received the award for 'Best Female Vocalist of the Year'[26] at the 2015 Ghanaian dancehall awards, BASS awards. Her trademark natural African hair and hit single ‘Natural Girl’ has made her an inspiration to young girls across Africa who want to celebrate their natural look.[27]

MzVee's impressive rise to the top continued with a nomination in June 2015 in the 'Best International New Artist' category[28] at the BET Awards 2015. This brand new fan-voted category celebrates rising stars from across the channel’s international footprint.[29]

In October 2015, MzVee was appointed the World Bank Ambassador for their 'End Extreme Poverty Campaign'.[30] She released the official campaign song titled 'End Poverty'[31] and became a World Bank #Music4Dev Guest Artist; a role which has been held in the past by a number of award-winning artists including D'Banj and Fally Ipupa.[32][33]

MzVee was named in MTV Base's list of the top African artists to watch out for in 2016. This list featured the breakthrough hit makers of 2015 on the African continent.[34][35] She has also been nominated in the ‘Best Urban Artist’ category at the 2016 KORA Music Awards[36][37] and received 7 nominations at the 2016 Ghana Music Awards[38] including Songwriter of the Year[39] with Richie Mensah and Efya, Album of the Year[40] and Best Female Vocalist.[41]

On May 20, 2016, MzVee was nominated for the BET Awards 2016 - Best International Act: Africa category and became the first Ghanaian female musician to be nominated for a major BET Award.[42] She was also nominated in the Best Female category in October 2016 for the MTV Africa Music Awards.[43] 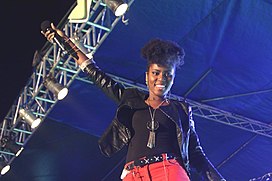 MzVee singing at a concert

Best Video of the year at VGMA 2019 with her song come and see my Moda.

‘I Don’t Want To Be A Celebrity In Ghana Anymore’, DKB Worries Out

Shatta Wale To Request For Bail After One Week Remand

Give Them Space If They Want To Make You Look Stupid, Ghanaian Student Advises

Reasons Why Women Moan During Sex

5 Things You Should Stop Now If You Practice Them

6 Signs That Shows She Does Not Love You

4 Core Reasons Why Men And Women Become Unfaithful In Relationships

This website uses cookies to improve your experience while you navigate through the website. Out of these, the cookies that are categorized as necessary are stored on your browser as they are essential for the working of basic functionalities of the website. We also use third-party cookies that help us analyze and understand how you use this website. These cookies will be stored in your browser only with your consent. You also have the option to opt-out of these cookies. But opting out of some of these cookies may affect your browsing experience.
Necessary Always Enabled
Necessary cookies are absolutely essential for the website to function properly. These cookies ensure basic functionalities and security features of the website, anonymously.
Functional
Functional cookies help to perform certain functionalities like sharing the content of the website on social media platforms, collect feedbacks, and other third-party features.
Performance
Performance cookies are used to understand and analyze the key performance indexes of the website which helps in delivering a better user experience for the visitors.
Analytics
Analytical cookies are used to understand how visitors interact with the website. These cookies help provide information on metrics the number of visitors, bounce rate, traffic source, etc.
Advertisement
Advertisement cookies are used to provide visitors with relevant ads and marketing campaigns. These cookies track visitors across websites and collect information to provide customized ads.
Others
Other uncategorized cookies are those that are being analyzed and have not been classified into a category as yet.
SAVE & ACCEPT
WhatsApp (+233) 0209089110
Email: info@africabillboard.com