Boateng was born in the Muswell Hill district of London on 28 February 1967, the son of Ghanaian immigrants.[1][2] He was inspired by the immaculate suits his father wore, and received his first suit (a double-breasted outfit in purple mohair) from his mother at the age of eight.[3] When he was 14, he found a summer job sewing linings into suits.[4] While studying computer science at Southgate College at the age of 16, he was introduced to cutting and designing by his girlfriend.[1][5] Using his mother's old sewing machine, he started designing and selling to his fellow students, and switched to graduate in fashion and design.[1] He helped a friend to make clothes for a fashion show; after receiving praise for his work, he sold his first collection to a menswear shop in Covent Garden. Some of his first pieces were also sold in Academy on Newburgh Street in 1987. This enabled him to open his first studio in Portobello Road in 1991. In 1994, he staged his first catwalk presentation during Paris Fashion Week, becoming the first tailor to stage a catwalk show in Paris.[5]

Mentored by Tommy Nutter, the success of the Paris show in 1994 enabled Boateng to open his boutique on Vigo Street, the south end of Savile Row, in 1995.[3][6]

Boateng's contemporary approach to menswear design helped to forge a new appreciation for Savile Row, and draw in a younger demographic.[7] Boateng's moved fully into Savile Row in June 2002.[8]

In 2005, Boateng was honoured with a major 20-year retrospective event at the Victoria and Albert Museum.[9]

In 2008, Boateng's new flagship store and headquarters are launched at No. 30 Savile Row, on the corner of Savile Row and Clifford Street. The largest store on this Mayfair street, as of November 2019, its signs and interiors were co-designed with British-Ghanaian Architect David Adjaye.[10] As if November 2019 it remains the only Black-owned store on Savile Row, and has since 2010 been managed by Moroccan-born Bespoke manager, Khalid Fakhour.[11]

In 2003, Boateng launched a new product in fragrances for women. Bespoke comprises two different vials of fragrance within an elongated, jewel-like bottle.[6]

In 2007, Boateng merged the corporate headquarters of his company with his redesigned flagship store on Savile Row.[12] Today,[when?] in addition to a bespoke service, Boateng also produces two ready-to-wear collections a year,[13] produced at the former Chester Barrie factory in Crewe, Cheshire.

LVMH President Bernard Arnault appointed Boateng Creative Director of Menswear at French Fashion house Givenchy.[14] In a 2019 interview with Icon Mann,"[15] Boateng reveals that back then his "challenge [had been] to reinvent the French gentleman," and that "he [had] succeeded in doing so."[16] His first collection was shown in July 2004 in Paris, at Hotel de Ville.[17] Boateng parted with Givenchy after the Spring 2007 collection.

In 2004, Boateng designed new amenity kits for Virgin Atlantic's Upper Class. Critically claimed to be the most stylish first-class kits available to travellers on any airline, the design increased pick rate[clarification needed] fivefold.[19]

Boateng was commissioned by John Agyekum Kufuor, President of the Republic of Ghana, to design and orchestrate a show at the 9th Annual African Union summit in 2007. Held in Accra, it coincided with 200 years since the cessation of the transatlantic slave trade, and 50 years of independence for Ghana.[20]

In September 2018 British Airways confirmed that Boateng had been chosen as the designer for its new uniform, to be launched in 2019 as part of the organisation's centenary celebrations.[21] This appointment was a matter of controversy amongst customers of the airline and staff alike, who had come to believe that the new uniform would be designed in partnership with the British brand Burberry.[22]

On 22 June 2006, the Sundance Channel and Reveille LLC released an eight-part real life documentary series called House of Boateng, tracking the journey of Boateng as he embarks on the expansion of his brand in the United States.[24] The series was produced by Robert Redford and Ben Silverman.

As well as design, Boateng has created and directed film projects of his own.

Boateng was once married to a woman named Pascale, though they divorced at an unknown date. He later married Azerbaijani fashion model Gyunel Taylor. The couple had two children, Emilia and Oscar, before divorcing in 2009.[30] Emilia is also a model.[31]

Boateng has said that his mantra is, "If you flow with history and don't fight with it, eventually it becomes a dance."[16] 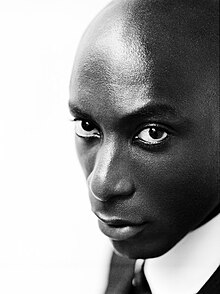 In 2008, Boateng was appointed to the REACH committee, as part of an independent panel to identify and recruit national role models who work to help raise aspirations of black boys.[32]

Boateng, alongside Kola Aluko in partnership with Atlantic Energy, founded Made in Africa Foundation, a UK non-profit organisation established to assist the development of the African continent, by providing first-stage funding for feasibility studies and business development of large-scale infrastructure projects based in the region. The foundation was established on the basis of “reframing the dialogue and perception of Africa”, with the principals signing an agreement with the African Development Bank."[16]