Region of Ghana
Region in Ghana

The Greater Accra Region has the smallest area of Ghana's 16 administrative regions, occupying a total land surface of 3,245 square kilometres.[3] This is 1.4 per cent of the total land area of Ghana. It is the second most populated region, before the Ashanti Region, with a population of 5,455,692 in 2021, accounting for 17.7 per cent of Ghana's total population.[4][5]

In 1960, Greater Accra, then referred to as Accra Capital District, was geographically part of the Eastern Region. It was, however, administered separately by the Minister responsible for local government. With effect from 23 July 1982, Greater Accra was created by the Greater Accra Region Law (PNDCL 26) as a legally separate region.[7]

The Greater Accra Region is bordered on the north by the Eastern Region, on the east by the Volta Region, on the south by the Gulf of Guinea, and on the west by the Central Region. It is smallest region of Ghana in total area, and is made up of 16 administrative areas.

The Ga people celebrate the Homowo festival, which literally means "hooting at hunger." This festival originated several centuries ago. It is celebrated in remembrance of a great famine that hit the Ga people in the sixteenth century. It is mainly a food festival which celebrates the passing of that terrible period in Ga history. It takes place in August every year and is celebrated by all the Ga clans.

The Adangbe people from Ada celebrate the Asafotu festival, which is also called 'Asafotufiam', an annual warrior's festival celebrated by Ada people from the last Thursday of July to the first weekend of August commemorates the victories of the warriors in battle and is a memorial for those who fell on the battlefield. To re-enact these historic events, the warriors dress in traditional battle dress and stage a mock battle. This is also a time for male rites of passage, when young men are introduced to warfare. The festival also coincides with the harvest cycle, when these special customs and ceremonies are performed. These include purification ceremonies. The celebration reaches its climax with a durbar of chiefs, a colourful procession of the Chiefs in palanquins with their retinue. They are accompanied by traditional military groups called 'Asafo Companies' amidst drumming, singing and dancing through the streets and on the durbar grounds. At the durbar, greetings are exchanged between the chiefs, libations are poured and declarations of allegiance are made. 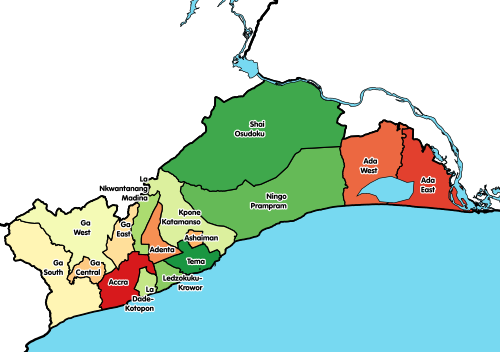 Districts of the Greater Accra Region

The political administration of the region is through the local government system. Under this administration system, the region is divided into 29 MMDA's (made up of 2 Metropolitan, 23 Municipal and 4 Ordinary Assemblies).[1] Each District, Municipal or Metropolitan Area and it's corresponding constituency, is administered by a Chief Executive and a Member of Parliamnet, representing the central government but deriving authority from an Assembly headed by a presiding member elected from among the members themselves. The MMDA's were increased from 3 to 5 in 1988; then from 5 to 6 in 2004; then from 6 to 10 in 2008; then from 10 to 16 in 2012; and recently from 16 to 29 in 2018. The number of constituencies increased/spread from 22 to 27 in 2004 making and 34 prior to the 2012 Ghanaian general election.The current list is as follows:

According to the 2010 census, the region had a population of 4,010,054, making it the second most populous (total number of people) region of Ghana behind the Ashanti Region.[4] Owing to in-migration and a high population growth rate, however, the region has the highest population density in the country.

The Ga sub-group of the Ga-Dangme people is the historical population of Accra. They form the largest ethnic sub-group in the Greater Accra Region, with 18.9% of the population.[11][circular reference] The Ga peoples were organized into six independent towns (Accra (Ga Mashie), Osu, La, Teshie, Nungua, and Tema). Each town had a stool, which served as the central object of Ga ritual and war magic. Now, the town of La has a community bank which offers banking services to them.[12] Accra became the most prominent Ga-Dangme towns and is now the heartbeat and capital of Ghana.[4] The Ga people were originally farmers, but today fishing and trading in imported goods are the principal occupations. Trading is generally in the hands of women, and a husband has no control over his wife's money. Succession to most offices held by women and inheritance of women's property are by matrilineal descent. Inheritance of other property and succession to male-held public offices are by patrilineal descent. Men of the lineage live together in a men's compound, while women, even after marriage, live with their mothers and children in a women's compound. Each Ga town has a number of different cults and many gods, and there are a number of annual town festivals. The Adangme people occupy the coastal area of Ghana from Le Kpone to Ada, on the Volta River and South Atlantic Ocean along the Gulf of Guinea and inland along the Volta River. The Adangme People include the Ada, Le Kpone, Krobo, Ningo, Osuduku, Prampram, and Shai, all speaking Adangbe of the Kwa branch of the Niger-Congo family of languages. [5] The Adangme People have the largest Population among the two related Ga-Adangme People. About 70% of the Greater Accra Regional Land is owned by the Adangmes located in Dangme East and Dangme West Districts of Ghana.

1.3% of the inhabitants of the Greater Accra Region are immigrants from outside Ghana.

The religious affiliations of the people of the Greater Accra region are below:[1]

The Greater Accra region is served by the Kotoka International Airport in Accra. The airport offers flight to destinations within Ghana, the African continent and to other continents.

Four National highways – N1, N2, N4 and N6 – and one Regional highway – R40 – pass through the Greater Accra region. N1 enters the region in Ada to the east and runs west, intersecting the N2 at Tema, the Ghana Road Network Tetteh Quarshie Interchange, and the N6 at Achimota. It passes through Kokrobite and exits the region at Weija where it continues on through the Central Region to Elubo in the Western region. The N2 crosses the Eastern Regional border into Asikuma and runs north entering the Upper East Region, ending at Kulungugu. The N4 heads north from the Tetteh Quarshie Interchange, while the N6 originates from Achimota. These highways cut through the northern part of the region and terminate at Kumasi in the Ashanti Region.

There is also an active railway line connecting Accra and Tema.

Greater Accra has three public four-year institutions, the University of Ghana in Accra, Ghana Institute of Journalism and University of Professional Studies, East Legon, Accra. In addition, there are number of private universities and university colleges spread through the region.

Shopping centres and their locations