Region of Ghana
Not to be confused with Ashanti Empire.
Region in Ghana

The Ashanti Region is located in south Ghana and it is the third largest of 16 administrative regions, occupying a total land surface of 24,389 km2 (9,417 sq mi) or 10.2 percent of the total land area of Ghana. In terms of population, however, it is the most populated region with a population of 4,780,380 according to the 2011 census, accounting for 19.4% of Ghana's total population. The Ashanti Region is known for its major gold bar and cocoa production. The largest city and regional capital is Kumasi.

The Ashanti Region is centrally located in the middle belt of Ghana. It lies between longitudes 0.15W and 2.25W, and latitudes 5.50N and 7.46N. The region shares boundaries with six of the sixteen political regions, Bono, Bono East and Ahafo Regions in the north, Eastern region in the east, Central region in the south and Western region in the South west. The region is divided into 27 districts, each headed by a District Chief Executive.

Several festivals are celebrated in the region, the major ones being the Akwasidae and Adae Kese. These are religious festivals celebrated by some members of the Akan ethnic group of which the Ashanti belong. The festivals are celebrated to remember past leaders and heroes. Though they are dead, their spirits are believed to be alive and taking interest in the affairs of the living, watching their actions, and consulting with them during the Adae festival. 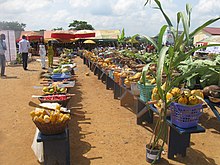 The center of population of the Ashanti Region is located in the Kumasi Metropolitan District. According to the 2000 census, the region had a population of 3,612,950, making it the most populous region; however, its density (148.1 per square km) is lower than that of Central (162.2/km2) Region.[5] Majority of Ashanti region's population are Ethnic Akans and citizens by birth (94.2%) with five per cent naturalized Ghanaians. A smaller proportion (5.8%) of the population originate from outside Ashanti and Akanland or Ghana, made up of 3.7 per cent mainly from the five English-speaking countries of ECOWAS and 2.1 per cent from other African countries. The non-African population living in the region is 1.8 per cent of the total population. Akans are the predominant ethnic group in the region, representing 94.2% of citizens by birth. A high proportion (82.9%) of the Akan population is Ashanti.[6]

The Ashanti region is served by the Kumasi Airport, which handles domestic flights. Five national highways – N4, N6, N8, N10 and N6 – and a few regional highways such as the R52 and R106 serve the region.

The N6 connects Kumasi via Kwame Nkrumah Circle and through Nsawam and N4 to Accra. The region is also connected to the Central Region by the N8 and N10, both of which originate from Yemoransa in the Central Region. The N10, however, connects the regional capital of Kumasi. 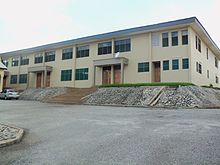 The Ashanti region has three public universities. In addition, there are a number of private universities and university colleges spread throughout the region. 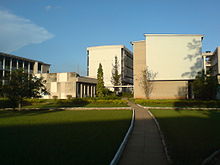 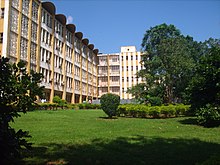 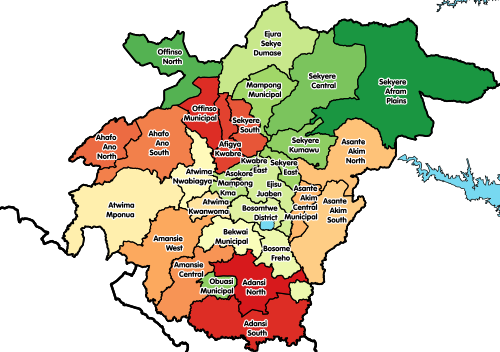 Districts of the Ashanti Region