The Accra Academy is one of the foremost secondary educational institutions in Ghana and operates as a non-denominational day and boarding boys' school, located at Bubuashie, near Kaneshie in the Greater Accra Region. It was the first private academy to be established in the Gold Coast.[9][10][11][12]

The academy's founders provided tuition to students who wanted a secondary-grade education but who did not have financial support to enable them do so.[8][20] Dr. Kofi Konuah periodically travelled to some of the major towns in each region of the country to organize entrance examinations for students, so as to offer the brilliant but needy among them the opportunity of education in the Accra Academy.[21]

The academy does not offer special admission to brilliant but needy students but, as per a 2005 directive from the Ghana Education Service, admits its students through a school selection placement system.[22]

The academy was established as a private secondary educational institution in 1931 and gained the status of a Government-Assisted School in 1950. In 1981, the academy gained the status of a completely developed senior secondary school. In 1990, the academy became a semi-autonomous secondary educational institution and operates as such with the aid of a board of governors, a Parent-Teacher Association and a students' representative council.[8]

Accra Academy was ranked 8th out of the top 100 best high schools in Africa by Africa Almanac in 2003, based upon quality of education, student engagement, strength and activities of alumni, school profile, internet and news visibility.[23] 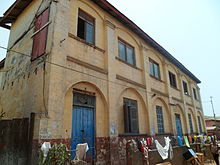 The academy was founded by Messrs.Kofi George Konuah, Samuel Neils Awuletey, Gottfried Narku Alema and James Akwei Halm-Addo on July 20, 1931, at Mantse Agbonaa, a suburb of James Town in Accra.[1][9][14]

The academy's founders operated the school from a two-story house that provided classrooms for the students. The facility was named Ellen House after its leaser, Ellen Buckle. The academy began work with a student enrolment of 19, distributed into Forms 1 through to 3. The founders of the academy together with M. F. Dei-Anang and Samuel Sonkor Sackey comprised the initial teaching staff of the school. Sackey worked as a teacher and Bursar and Awuletey taught shorthand and Book-keeping. Lutterodt set up the science department and Alema taught agricultural science.[8] 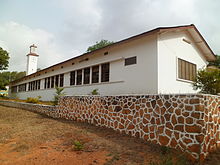 The academy operated as a day-school for some time after its inception till it began accommodating students in Claremont House, a single-storey building adjoining Ellen House. Accommodation was limited and therefore was only offered to students in special circumstances. Due to a steady increase in the number of applicants applying for enrolment in the academy, the academy's administrators began preparations to relocate the academy to a larger and permanent site. The initial site that was acquired to relocate the school was situated at Kokomlemle; however, this site had to be abandoned as a result of a prolonged litigation concerning the ownership of the land. A second site, which was located at Korle Gonno, was also given up because of its remote location.

The search for a new school site ended in 1956 when Halm-Addo succeeded in lobbying the Convention People's Party government to relocate and expand the academy as part of its accelerated development plan.[27] Owing to his efforts, the academy was offered a 37-acre plot of land at Bubuashie, off the Winneba Road.[8]

J. Monta & Sons was awarded the contract to develop the new school site in October 1959, however actual work on the site began in December of the same year and by July 1961, J. Monta & Sons presented the newly developed school site to the school administrators for the celebration of the academy's thirtieth anniversary. In September of the same year, both staff and students relocated from Ellen House to the present site at Bubuashie. A ceremony to officially recognize the academy's relocation to Bubuashie was held in February 1962 and A. J. Dowuona-Hammond, then Minister of Education declared the new school site opened. The academy acquired the nickname Little Legon shortly after the new school site was commissioned, when some students from the Western Region who had gained admission into the University of Ghana, reported at the academy instead of the University of Ghana, apparently confused by the close similarity between the infrastructure of both educational institutions. A dormitory block to serve as a residential facility for students was completed later in 1966.[8]

In 1981, the academy celebrated its golden jubilee with the status of a fully fledged senior secondary school with a student enrolment of 900 and a teaching staff of 52. In 1990, the Provisional National Defense Council permitted the academy to operate as a semi-autonomous educational institution, together with 10 other secondary schools upon acknowledgement by the Secretary of Education, K. B. Asante.[8]

Being a senior high school for boys, the academy offers admission to boys only. Gaining entry into the academy is competitive,[28] and open to students who have completed Junior high school. Prior to writing their Basic Education Certificate Examination (BECE),[28] final year Junior High School students, register for senior high school through a computerized school selection and placement system (CSSPS) which was introduced by the Ghana Education service in 2005.[22][29]

The programmes run in the academy are: general arts, general science, agriculture, business and visual arts. As part of their computerized school selection and placement system registration, final year junior high school applicants select four elective courses. Unlike elective courses, core courses are offered to all students, irrespective of their programme of study.[28][30][31] The academy's core courses are: English language, core mathematics, social studies, integrated science, ICT (core) and physical education, however, students are only examined both internally and externally as well, in the first five aforementioned courses.[32]

The academy is one of 34 schools in Ghana established before Ghana attained its independence from Britain.[35] From among these 34 schools, the academy is one of 20 schools recognized by the Ghana Education service as a category A school, based on the number and type of facilities that the school maintains. Some of these facilities include: an assembly hall, a basketball court, a boarding house, a bookshop, a cafeteria, a clinic, a guidance and counselling centre,[36] a dining hall, a football park, a gymnasium, an interact square, an information and communications technology centre, a library, a physics laboratory, a chemistry laboratory, a biology laboratory, a science resource centre, staff bungalows, a lecture theatre, an administration block, a business classroom block, a general arts classroom block, a general science classroom block, a visual arts classroom block and a volleyball court. 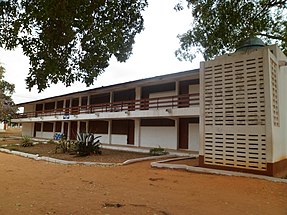 The academy has eight halls of residence. The first four of these halls were inaugurated as part of the school's 1967 Annual Speech and Prize Giving Day activities. Among them three are named after one founding father of the school, with the exception of Dr. Kofi Konuah, while the fourth is named after Mrs. Ellen Buckle. They are as follows; Alema, Awuletey, Ellen, Halm Addo.[37] The remaining four halls were inaugurated as part of the school's 83rd Founders' Day Celebration in 2014. They are named after the following prominent alumni; Nana Akuoko Sarpong, Rt. Hon. Peter Ala Adjetey (a.k.a. Nana Otoafom Bekoe), Nana Wereko Ampem II, Nana Awuah Darko Ampem.

Each hall is supervised by a hall-master while a senior hall-master serves as a liaison between all four halls of residence. Hall-prefects assist hall-masters in the performance of their official duties and have a general responsibility to maintain order in their halls.

Hall-masters are not resident in the halls they supervise but rather housed in staff bungalows on the school's premises, on the other hand, hall-prefects reside in the halls in which they exercise jurisdiction. Each hall of residence contains a bedroom, storage room, ironing room, prefects' cubicle and a washroom.

Each academic year, the administrators of the academy organize athletics competitions between the members of the four Halls of Residence as a way of building up rapport among students. These inter-Hall athletic competitions also serve as an avenue for the academy's sports trainers to select students with outstanding sports qualities who can represent the academy in external sports competitions.

The Accra Academy maintains strict rules on discipline.[36] A student undertaking a mild punishment is asked to carry out cleaning, scrubbing, sweeping, weeding or disposing of refuse. A student who commits a grievous school offence is made to proceed on an indefinite suspension or is dismissed from the academy, a notable example of which is the dismissal of Chuckie Taylor, the son of the former president of Liberia, Charles Taylor, on grounds of possessing drugs and weapons.[38]

Academy students are involved in Extracurricular activities through their membership in school associations and clubs,[13] some of which include:

As early as 1934, the academy's administrators hired a sports-master to organize the sporting activities of the academy. Students were trained in athletics, soccer, and hockey. The academy won the Aggrey Shield together with seven other trophies in the annual inter-college athletics competition held in 1950, and through which the academy became recognized in Ghanaian inter-college sports, while the words "Accra Aca, Bleoo" came to also serve as a slogan for the school.[3][8]

The academy's administrators organize annual events for the students and alumni of the school, including a speech and prize-giving day ceremony, a Founders' Day Lecture and a Home-coming Reunion. The annual speech and prize-giving day ceremony award the school's best performing students. Occasionally retired as well as active teachers and staff of the academy are awarded for their contributions to the school.[51] The Konuah-Halm-Addo-Awuletey-Alema Memorial Lectures was instituted in 1991 by Vincent Freeman, then academy headmaster, as part of the school's 60th-anniversary celebrations. Home-coming reunions are usually organised as part of the academy's anniversary celebrations. They are usually characterized by bonding activities that include the singing of popular school songs called Jamas and the playing of table tennis, football and snooker.[52][53]

A Year Group receiving a citation

Bleoo '85 having fun on Stage

A Year Group poses for a photo

This award was instituted in 2007 by the 1974 year group of the academy, to encourage students studying science to pursue science related careers. Beneficiaries of the award have their boarding and tuition fees fully paid for them annually so long as they maintain an above-average overall academic performance.

The institution of the Alice R. O'Grady Scholarship Award was inspired by Miss Alice R. O'Grady, a former science teacher, who taught in the academy from 1968 to 1972, having come to Ghana as a member of a group of Peace Corps Volunteers from the United States.[54] O'Grady's teaching ability motivated most of the students she taught in the academy to take science more seriously and to pursue science=related careers. Her former students having attained remarkable accomplishments in field of science,[54] instituted the award as a way of honouring her.[55] The purpose of the award is stated as follows:

In recognition of her invaluable service to Accra Academy,
the Alice R. O’Grady Scholarship Award will aim to assist brilliant but financially needy students
who wish to pursue Science or a science-oriented career in future to realize their dreams.[55]

The association functions as an old boys network which is opened to any person who has been enrolled in the academy for more than one year.[56][57]

An alumnus of the Accra Academy is referred to as a Bleoobi. Some notable alumni of the academy are as follows:

There was a nationwide teachers strike in the 1970s and some Accra Academy students who were capable of learning the school curricula on their own offered lessons free of charge to their colleagues in Accra Academy and St. Mary's Senior Secondary School. The goodwill demonstrated by these students from the Accra Academy won the admiration of staff and students of the St. Mary's Senior Secondary School and resulted in the formation of the alliance to foster stronger ties between both secondary educational institutions.

The Accra Academy Lodge is a Masonic lodge managed by alumni who are Freemasons in the Grand Lodge of Ghana or the Grand Lodge of Scotland. The lodge is not part of the school's administration and as such has its own management and premises. Membership in the lodge is open only to alumni. Members occasionally support the school with financial assistance.