Egypt won the tournament, beating Cameroon 1–0 in the final. As winners, they qualified for the 2009 FIFA Confederations Cup as the CAF representatives.

The organization of the 2008 Africa Cup of Nations was awarded to Ghana on 8 July 2004 by the CAF Executive Committee members which are 12 in Cairo, Egypt. Voters had a choice between Ghana and Libya which was disadvantaged by the fact that two countries in the North Africa region had already hosted the last two editions (Tunisia in 2004, and Egypt in 2006).

South Africa, also was a candidate at the start, eventually withdrew in May 2004 after being nominated for the organization of the 2010 FIFA World Cup.

The entrants were divided into 12 groups. All group winners and the best three runners-up from groups with four teams (groups 2-11) qualified for the finals. Host Ghana qualified automatically. Qualifying took place between 2 September 2006 and 13 October 2007. 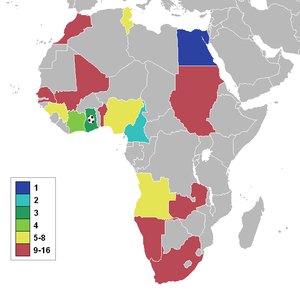 A map of Africa showing the qualified nations, highlighted by stage reached.

16 referees and 16 assistant referees were selected for the tournament, including two from Japan and one from South Korea.[2]

The draw for the tournament took place on 19 October 2007. The sixteen teams were divided into four pots according to their performances in past Cup of Nations tournaments. Ghana, as host, were automatically seeded as the top team in Group A. Egypt, the defending champions, were seeded as the top team in Group C.[3] Each group consists of four teams, one drawn from each of the pots.

During the previous editions of the Africa Cup of Nations, the ball used was not a ball especially made for the tournament. As the tournament was held on even years, the same years big tournaments such as the UEFA European Championships or the FIFA World Cup were held, the official ball for the tournament held this year was used for the African Cup of Nations: the Adidas Roteiro in 2004, or the Adidas Teamgeist in 2006. However, for the 2008 tournament, Adidas made a special ball, clearly different from the Adidas Europass going to be used five months later for the Euro. The ball was named Wawa Aba and was designed to include host nation Ghana's red, yellow and green. The ball was later used for the other African competitions.

For the Akan culture originating from Western Africa, one of the Adinkra symbols named Wawa Aba is a symbol of hardiness, toughness, and perseverance.[4] People there particularly believe in the strength and team spirit of a community. The Wawa Aba literally means "seed(s) of Wawa tree (Triplochiton scleroxylon)”,[5] one of the strongest and most processible woods of Africa and whose seeds are very hard. For the population, the Wawa Aba mainly has mystical significance. These are people who don't let failure discourage them, who seize all opportunities successfully and who are thus just as strong and adaptable as the Wawa Aba.

Where two or more teams end the group stage with the same number of points, their ranking is determined by the following criteria:[6]

All times given as local time (UTC+0)

Media related to 2008 Africa Cup of Nations at Wikimedia Commons